What I Watched Sunday Night

Every now and then, I come across a film that impresses me because I find it very funny, very sad, very gripping, disturbing, perfectly styled; I find it impressive because of its actors, its music, its atmosphere – or a combination of several of these elements. Sunday night, I watched one such film: Django Unchained. 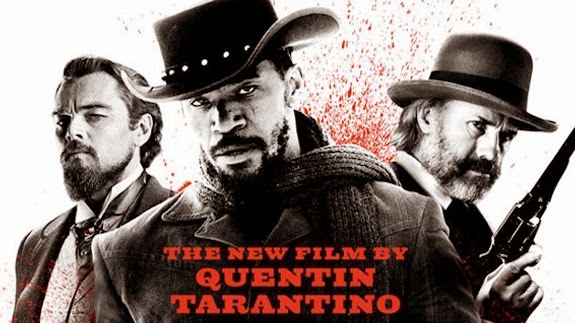 If you have not seen it, don’t worry; I am not going to spoil it for you by telling you exactly what happens and how it ends. If you have seen it, maybe you experienced similar emotions as I. The film is set in the US’ Deep South in 1858, where slavery was still widespread at that time. There is some really witty dialogue, but because of the sad and serious background, sometimes your laughter will die in your throat. The story is well plotted, the characters are convincing, and there are so many hints at other movies that I am sure I caught less than a quarter (me not knowing all that many movies of course played a role).

The cast is excellent: Who does not see Jamie Foxx, Christoph Waltz, Leonardo DiCaprio and Samuel L. Jackson as very talented actors?
Admittedly, I don’t think this is Jackson’s best performance; he was great in “Jackie Brown” and brilliant in "Lakeview Terrace". (Click the title if you are interested in my review of it.) As for DiCaprio – well, I had a hearty dislike for him when he rose to stardom with “Titanic”, and have come to appreciate his skill only in recent years, when I (very reluctantly at first) watched films like “Catch Me If You Can” and “Blood Diamond” with RJ, loved the first and was very impressed with the latter. (More about both movies and how my opinion regarding Di Caprio has changed here.) Foxx I’ve only seen once before, in “Ray”, a (really good, in my opinion) film about the life of Ray Charles. And Waltz? He’s one of those faces that used to be very present on German telly when I was a teenager. Even back then, I saw his talent for comedy (although he did not play that many comical characters), but sort of lost track of him, not being all that interested in German telly or movie productions in the first place. For “Django Unchained”, he is perfect, and if I were a member of the team of judges for the Academy Award, I would have voted for him in 2013, too.

Those few Quentin Tarrantino movies I've seen so far I've all enjoyed very much (on different levels), although I must say they are rather... extreme, and certainly not to everyone's taste. Still, "Jackie Brown" is one of my all-time favourites, and the only one I've watched several times, having it on DVD.
Posted by Librarian at 20:51