"Buried Cities" by Jennie Hall was a non-fiction read I truly enjoyed and can highly recommend.
Originally published around the year 1900 (I couldn't find any clearer information) and aimed at children, "Buried Cities" describes not only what life must have been like when Pompeii, Olympia and Mycenae were bustling cities, but also how they came to be lost and eventually were found again. 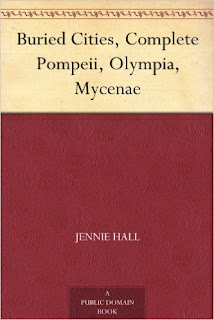 The chapters about Pompeii and Olympia each start with the story of a child living (Pompeii) or visiting (Olympia) there. Characters, places, rooms and situations come alive by very vivid descriptions. Even without the many pictures that originally were part of the book (but not in my free kindle version), it was easy to mentally see the sites, hear the sounds and even smell the scents.

Pompeii's story is of course much more dramatic than Olympia's, and Mycenae is different from both. But all three are "lost cities" and offer a fascinating glimpse into worlds long gone, where a lot of what went on in people's daily lives wasn't all that much different from ours, if looked at some of the most basic aspects.

What I read in the chapter about Olympia regarding Praxiteles' statue of Hermes with baby Dionysos made me do some research about the artist and his works. Also, I looked at some interesting websites about Pompeii and Mycenae - I love it when reading one book leads to such excursions and a bit of extra learning.

Jennie Hall (1875-1921) was a historical writer and teacher. She must have written quite a lot: goodreads.com shows 37 entries for her. But information is sparse - there is not even a wikipedia entry about her. I would have liked to know more, but all I could find after taking a closer look at the first pages of some online replicas of her books was that she was an "Instructor in History and English in the Francis W. Parker School, Chicago".

Seems like I am not the only one wondering about her - I found this blog while looking for more information on the author.
Posted by Librarian at 18:33