One of the best books I have read this year is one that was never intended to become a book: "The View from the Corner Shop" by Kathleen Hey is a collection of the real-life diary entries of a woman in her 30s, written in the years 1941 to 1946. 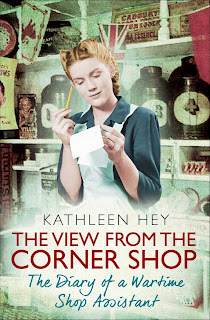 Kathleen Hey worked with her sister and brother-in-law at their grocery shop in Dewsbury (Yorkshire). She did not keep a journal for her own amusement, but wrote as one of hundreds of volunteers participating in the Mass Observation Project.

In case you are not familiar with the MO project (I wasn't, and had to look it up on wikipedia): It was a social research organisation founded in 1937 by an anthropologist, a poet and a filmmaker, aimed at recording everyday life in Britain by the means of diaries and questionnaires from around 500 untrained volunteers. (Actually, I find the entire project interesting enough for it to deserve its own blog post.)

Through Kathleen Hey's writing - supplemented with plenty of useful historic background information by the editors -, the reader gets to know her and her world rather well. Kathleen goes through life with eyes and ears wide open, and a mind that is capable of thinking beyond what is of her immediate concern. While she does not fail to see the humour in some of the goings-on in her family, at the shop or in town, she understands the seriousness of political decisions and their impact on a large scale.

As the years - and the war with all the restrictions it imposes on everyone's daily lives - go on, she seems to be losing some of her humour, and a dull, grey tiredness (not only in the physical sense) begins to dominate.
Even when the war ends (the diary spans another year after the war), she can not seem to get her former energy and enthusiasm back. I won't tell you too much here, because I'd really like for you to read this book for yourself; therefore, let me just say that I was deeply touched by the thoughts and feelings Kathleen expresses.

Apart from that, I learned a lot from this book. For instance, the rationing system (which, I understand, was still in use in the UK for several years after the war) is explained.

What surprised me was how people behaved towards each other. Up until reading this book, I was of the opinion that most people in the UK see WWII and the years immediately after it as a time when the nation stood together as a whole, when the slogan "Keep Calm and Carry On" was not only on posters but also in people's hearts and minds, when everybody gladly sacrified their small comforts for the benefit of their fellow Britons and the war effort.

According to Kathleen Hey - who was really there and wrote things down as they happened, not rose-tinted by nostalgia -, this was definitely not the case, at least not in the dimensions I was always made to believe.
On the contrary, there was a lot of petty arguing and small-scale fighting going on between groups and individuals with conflicting interests. For instance, young married women were apparently "getting off lightly", no matter whether they had children or not. Oranges were a constant bone of contention - who was entitled to how many, and why? Evacuees from bombed cities were not at all welcome, and when people were forced to take ithem in, the evacuees (fellow Britons all of them, not foreigners!) were looked down upon as not being of the same class, not clean enough, and too demanding.
The young ladies who joined the workforce as part of the war effort (for instance to work in ammunition factories) were so well paid and had it so "easy" with nice quarters and good clothes given to them that others envied them.
Most people Kathleen spoke to at the shop or knew in town tried to get out of any form of compulsory tasks (such as fire guarding) if they could.

All this, as I said, came as a surprise to me. When I read "A God in Ruins" (for instance), it all sounded very different. I suppose human memory is what it is - not very accurate when looking back at the past. Kathleen's writing, however, is not looking back; it is a daily account of what was her present.

Do not be misled by the cover picture - this is not a "cosy corner shop" novel, but an account that is touching, thought-provoking and sobering at the same time. Five stars from me.
Posted by Librarian at 18:57