"Jessica's Haunting" by Tina A. Gaskins could have been a relatively good book, if it had been written by a skilled writer. As it was, though, this writer did not show much skill. I don't know how old Ms Gaskins is, but something in her style made me think that she is, like an astonishing number of people, of the opinion that "anyone can write a book" as long as they have a good idea for a story. 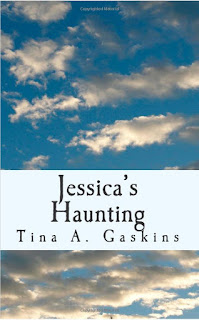 The story here is something of a ghost story, but not of the horror kind. Instead, the ghost in this case is the benevolent spirit of Jessica's boyfriend who died in an accident and keeps haunting her until he can be sure she has finally found true love and happiness.

The weird thing is that he is convinced she can find both only with his twin brother. A lot of people (last but not least, this reader) find the idea of getting together with the twin of a lost loved one a bit odd, if not to say slightly repulsive. No person can really ever replace another person, can they? And the author goes to great lengths to have her heroine explain that she is not at all seeking to replace her deceased boyfriend, but that the two men are very different.

It all is rather improbable and unlikely, also the extremely stubborn, stupid and aggressive way the two main characters often talk to each other and behave.

What kept me going, you may ask, and rightly so. Well, I did want to know whether the stuff I thought was going to happen would happen (it did, mostly) and how certain situations were going to develop.

But the unskilled writing (especially noticeable in the rather wooden dialogue which often went on unnecessarily for story and character development) really made me consider stopping a few times. I probably should have done so, but it's too late now. Just let me advise you NOT to download and read this book, even if you come across it as a free ebook (as I did).
Posted by Librarian at 19:42