On November 14, the moon was closer to the earth than it has been for almost 70 years. This closeness coincided with a full moon, an occurrence called a perigee-syzygy, or, to make it easier to remember, type and pronounce, a supermoon. (The opposite is an apogee-syzygy, or "micromoon".)

Some of you, dear fellow bloggers, were able to observe that supermoon from your homes. Not me; it was covered by a dense veil of clouds. But a friend of mine sent me an email with a photo of the supermoon as seen from Ripon's market square, and I have his permission to use the photo and what he wrote.

So, here is a mini guest post from George Pickles, Ripon's Hornblower until 2015:


Like most of the world we have been experiencing the Super Moon, but unfortunately here in England with our usual cloudy weather at this time of year, there was very little chance of getting a good view. However, with a little patience and a lot of good luck I managed to get this picture. 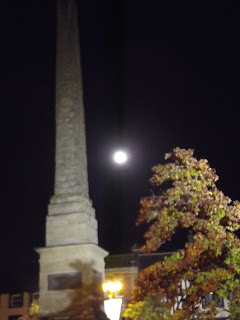 A break in the clouds saw the super moon light up the Ripon Square so brilliantly like I have never seen before. I submitted the photo to the local papers and it was published today (on the 18th).

Also, as a symbol of 'remembrance and unity' we had a soccer match between the British Army and the German Army. It was very well supported and was nice to see. You will be pleased to learn that the final score was Germany 2 goals to Britain I goal.
- - -  end of guest post - - -
I must say I liked the image of the Super Moon shining down on Ripon just as much as the idea of a friendly soccer match between British and German soldiers. Much better to have a bit of sporty competition on a football ground than on a blood-stained battlefield, isn't it! All the more it makes me sad when some "fans" abuse football and turn stadiums and surrounding city centres into real battlefields again.