Wednesday, May 11, was forecast as the warmest day this year so far. O.K. suggested we climb the Feldberg, at 1.439 m the highest mountain in our federal state of Baden-Württemberg.

Feldberg is hugely popular with tourists, even more so during the two years of the pandemic, creating big problems for the area; people parking left, right and centre, leaving a lot of rubbish behind and generally creating too much upheaval in the surrounding woods. Especially in winter, almost every weekend we heard warnings and pleas on the radio news, advising people NOT to travel there by car but to use public transport - or, even better, not go there at all.

But I had never been there, and since it was only a half hour's drive from our hotel AND we did not expect it to be busy on a Wednesday morning, we set off after breakfast. We arrived at the large multi-story parking house at about 10:30 and found it mostly empty. There were small groups of tourists around, but not many, and we knew that once we'd be past the main attractions, things would quieten down even more.

A circuit leads from the main tourism area (parking, shops, a Nature House with exhibitions and information, a hotel and restaurant) to the top and then onwards to take in the beautiful views, woodland and a lake before arriving back at the starting point. The first bit of that circuit up to the viewing platform on top of the mountain is a proper road and therefore the most popular part. After that, the path turns rocky and sometimes steep, and this makes for much less traffic. 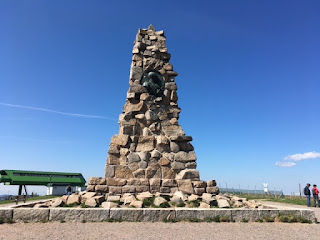 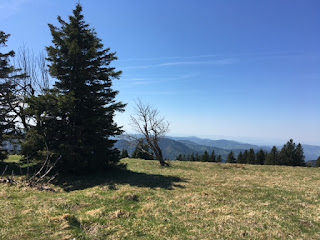 The weather was indeed perfect for a hike; it was cooler up there, with patches of snow dotting the green grass here and there. The snow was not purely white anymore, what with Sahara dust having blown over several times this spring, as well as yellow pollen. 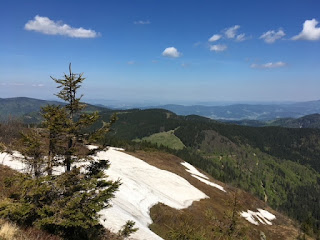 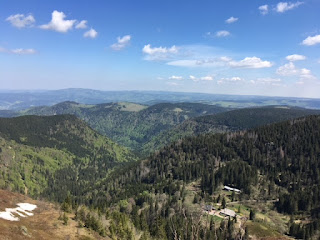 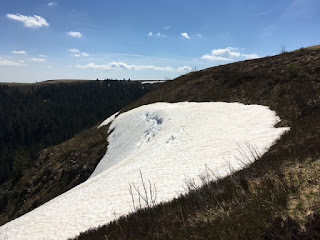 We came past this hut, belonging to Freiburg Skiing Club: 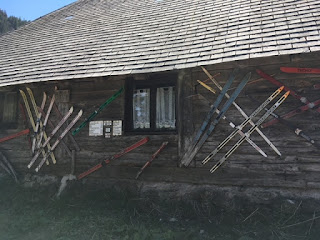 By the time we reached the Naturfreundehaus ("Friends of Nature House"), we were ready for a shandy.
If only we had walked on just a little further! The staff at this place were all up for chatting, smoking and joking with their guests, not so much about serving or selling. The lady who "served" us simply grabbed two bottles from a crate sitting outside the house (in the shade, yes, but not in a fridge), made up the price as she went, and passed me the bottles - one of which was empty... I gave the empty one back to her and received a full bottle with a careless shrug and no apology.
The toilet and what I could glimpse from the inside of the house was very clean, but I can really not recommend the place. Still, it looked very picturesque: 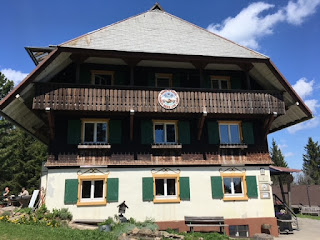 A little further on was another place open for business that made a much better impression; we shall remember that next time we're on that circuit.
The path took us on through the woods, past becks and with sunlight streaming through the trees, further down the slopes of Feldberg: 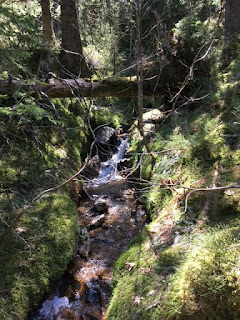 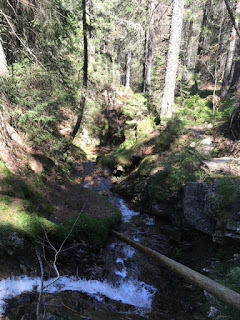 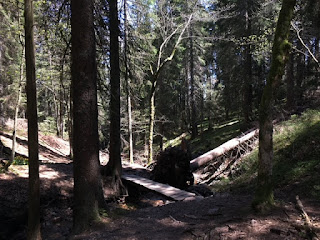 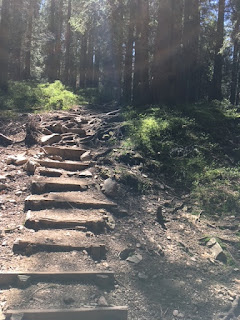 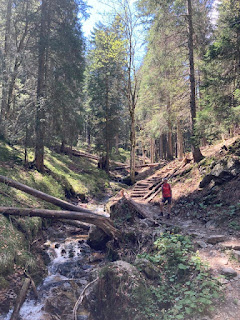 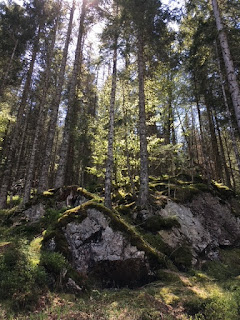 This big house is the Raismarti-Hof (Hof meaning farm in this context) and has been around for centuries. It is still a working farm, but as you can see, they also run a beer garden and restaurant. We had another shandy there - well chilled this time! 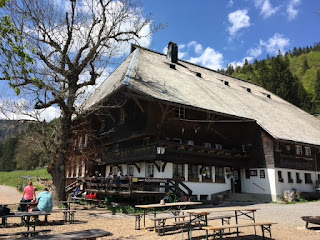 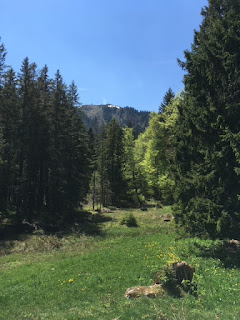 Feldsee (lake Feld) was our next stop. The signposted circuit touches the lake's border only briefly before moving on, but we decided to walk around to take it all in. It was beautiful and quiet: 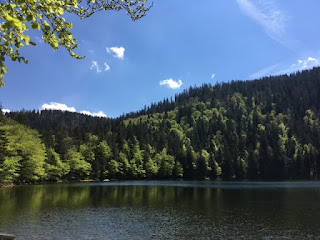 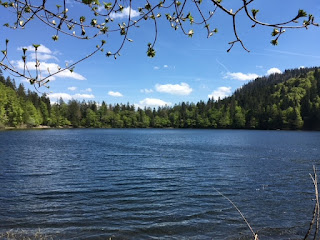 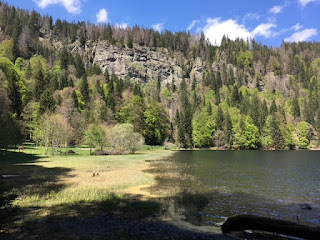 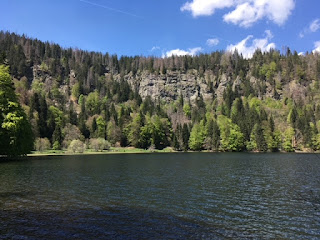 From there, the path lead steeply upwards over rough ground with many rocks and tree roots. Looking back towards the lake, I found the wall of rock looking back at me: 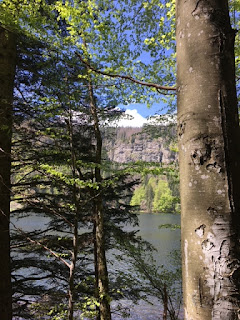 Reaching the car park again after about 13.5 km, we changed from our hiking boots into our trainers and drove back to the hotel - again, just in time for coffee and rhubarb cake.

We even had time for the sauna before changing and sitting down for dinner, which was delicious.

My first visit to the highest spot of my federal state had been great, and will probably see a repeat at some stage - just definitely NOT on a weekend!