Two mysteries by A.G. Barnett, each the first one of a series. Both were free downloads at Amazon's Kindle shop - a good way to get readers interested in a series! Especially with the first of the two I have read, I think I am going to look for the others, as I really enjoyed it. 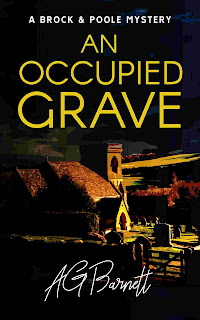 The author's website says this about the series: "Detective Sergeant Guy Poole’s past is always just behind him, despite his fresh start at Bexford police station, Addervale. There he is paired with Detective Inspector Sam Brock, as gruff on the outside as he is gooey on the inside, he’s determined that his label of ‘The Cursed Detective’ won’t come back to haunt him."

Not everything about the way Poole and Brock act is credible and logical, but then nobody always acts credibly and logically in real life, do they! The setting of the book is Yorkshire, which was most likely how I found it at the Kindle shop. The other characters in the book are just beginning to be fleshed out, so that the reader may expect some development in the course of the series.

Well written and well edited, a good Whodunnit - although I must admit I guessed very soon at who might be the murderer, and I was right. That did not take away my enjoyment; I still wanted to find out what happens next and how Poole starts to fit in.

# 11: An Invitation to Murder (A Mary Blake Mystery) 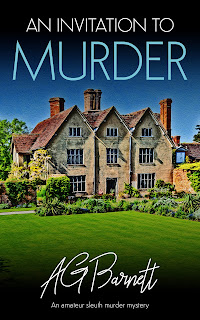 Mary Blake is an actress who for 20 years has been playing the leading role in a crime series on TV, immensely popular. With her fans, she is still popular, but now that she has turned 50, the producers think the series needs freshening up and cast a young actress to replace her.

Mary's world is turned upside down - will she have to resort to acting in commercials for stairlifts from now on, and give up her expensive London apartment?

An invitation by her brother to their childhood home in the country seems like a good distraction. But when a Mystery Dinner produces a real corpse the next morning, and Mary appears to be the prime suspect, she does everything she can to clear her name and solve the mystery.

A classic Locked Room mystery, but with smart phones - I enjoyed this one but am not sure I will look for more of the series. I did not become all that attached to Mary or any of the other main cast.

Editing seemed not to be as good as with the Brock & Poole book; for instance, in one of the last chapters, Mary, her brother and her friend are driving to a village with her friend driving and her brother described as talking from the backseat. All of a sudden, it is her brother who steers the car - I clicked back two pages to see whether I had missed them stopping for a break and switching drivers, but that wasn't the case. It's a small detail and has no implication on the story, but good editing prevents such slip ups.