Back from my Yorkshire Holiday, I spent a quiet Sunday doing my washing and other household things as well as visiting my parents. In the evening, I went for a walk on familiar paths - something that helps me to feel properly at home again. It was a hot and sunny day at about 30C, but it was close to 8:00 pm when I set off and therefore not quite so hot anymore. 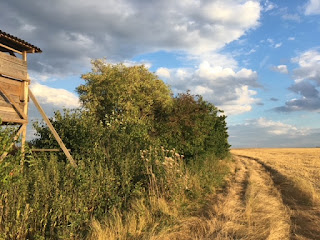 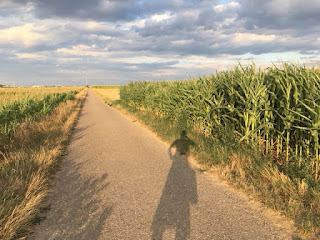 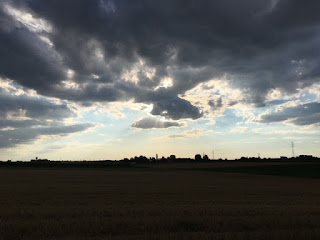 Monday was not only the start of the week and my first day back at work after two weeks away, but also the 1st of August (and Yorkshire Day!). Many of my clients are on holiday this time of year, and so there weren't all that many emails for me to sift through (only 109 in all my various inboxes combined).

Of course I wanted an after-work-walk, this time directing my steps the opposite way. It wasn't a very long walk, only just over 7 km in the space of 1 hour and 20 minutes, but it was good after so much time spent looking at screens and typing. 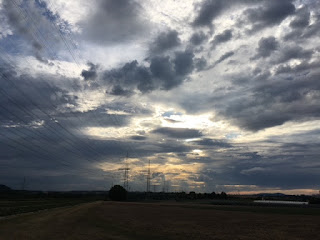 On Tuesday, it was again 30C, and I started my walk a little later, timing it so that I could take in the sunset and the slightly cooler temperatures.

The photo with the pink sky was taken at a quarter past 9 pm from my Third Room - still unusual for me that I can see so much sky from there, since the trees growing there before were cut down only this spring. 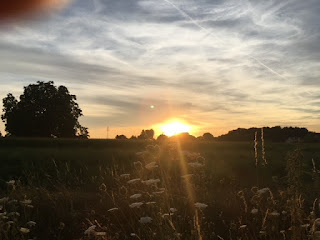 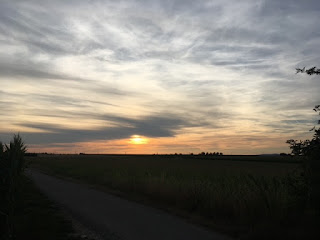 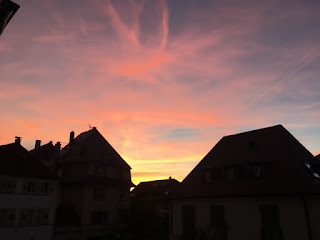 I did something on Wednesday that I had not done in a long time: Going for a run before work! Temperatures well over 30C were forecast for that day, and I knew I was not going to feel like walking then. Instead, I decided to go out at 7:30 in the morning, and did my standard 5K circuit on the fields at a very leisurely pace, taking 40 minutes - that's how leisurely it was! Still, in spite of the lovely fresh morning air, I was wet through afterwards, but had enough time for a shower and muesli before work started.

During my lunch break, I ran an errand for my parents, and after work went to deliver what they had requested. My sister was also there, and after we had spent some time with our parents, I accompanied her to her place. She is currently not only looking after the allotment she shares with her neigbhours, but also their house garden since they are on holiday, and I helped with watering the tubs and the vegetable plots.

Thursday was the hottest day of the week at 39C. I found work rather hard-going and was grateful when the client I mainly work with on Thursdays rang me in the early afternoon to let me know he was packing in for the day, he couldn't concentrate any longer. I was the same and had a bit of a rest before meeting with my volunteer group at 6:30 pm - in a beer garden under large trees. We went through the points that needed talking and deciding about as quickly as possible and then spent another hour or so just pleasantly chatting over large glasses of shandy.

I hardly slept during the night from Thursday to Friday, as the heat just wouldn't budge. Funnily enough, I was back at the same beer garden that evening with my "girl" friends - we had arranged to meet weeks ago and did not want to cancel in spite of the heat. Only four of us were there, but it was lovely to see them, especially one of our group who had not been able to attend the last few meetings. We had not seen each other in about a year, I think, and I was happy to see her looking so good and being really well after she'd been through a difficult time in her life.

Finally, a thunderstorm brought a little bit of rain (nowhere near enough, but better than nothing) and a much cooler night and morning. O.K. was still officially in self-isolation until the Sunday, so he did not come to my place for the weekend, and I spent Saturday mostly doing housework, which was a lot easier now that it wasn't so hot anymore.

After I had finished all I wanted to do, my sister and I went to have ice cream together - I believe the first or maybe second time this summer! 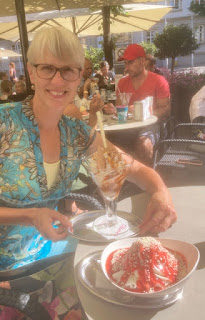 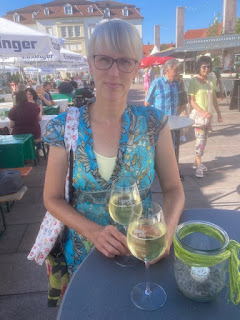 All that ice cream made us thirsty, and so it was only logical to move across the road to the courtyard behind the Town Hall, where the annual Weinlaube (wine fest) had started two days before. Like so many other events, it had not taken place for the last two years, and people had really missed it. At that time in the late afternoon, it wasn't yet too crowded, giving us a chance to really enjoy our glasses of white and the atmosphere.

Sunday was here again, and I went for a morning walk before doing my ironing. Later, I visited my parents, this time to join them for their evening meal (always a good idea, since my Mum is such a good cook!). I wrapped up the day and the week with one last walk before sunset. 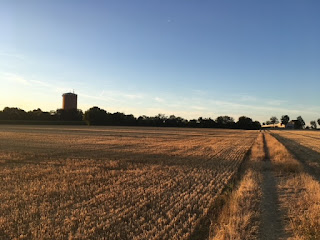 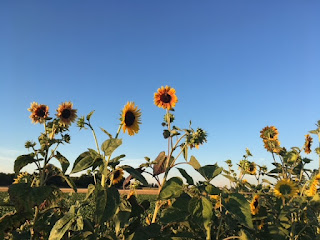 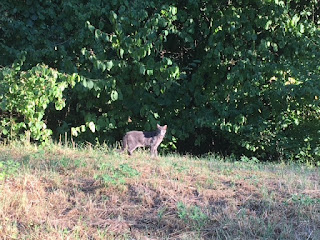