Before starting on my Yorkshire Holiday, I had read the first book in the Blake Hartley Mysteries series by John Waddington-Feather. You can find my review here. 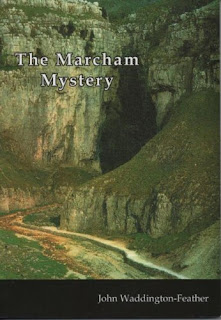 The Marcham Mystery, of course by the same author, is #3 in the series - I do not have #2, as it wasn't among the ebooks available for free at Amazon's kindle shop when I was looking. And it didn't matter, since the characters were already familiar to me from #1, and the case itself is stand-alone anyway.

The story: Well-known business man Sir Edward Marcham is found murdered in a sleazy hotel. What was he, an influential pillar of righteousness and charity, doing there? Detective Hartley's boss urges Hartley and his sargeant to tread carefully, considering the family's reputation - and his own, since he has been playing golf with Sir Marcham for years and thinks very highly of him.

You won't be surprised to read that Hartley and Khan stir up a hornet's nest with their investigation. Not only come sordid facts about Marcham's past and present to light, there are also shady business deals uncovered, and KGB agents play a role, too.

The big showdown between Hartley and the person behind it all takes place in Gordale Scar, a great rift in the Yorkshire Dales. I have never been there, but other places mentioned I know quite well - which is of course the main appeal of the series for me.

Again, the only negative thing I could say about the book is the stereotyping of some of the characters. But I guess to keep the story going, the author can not digress too far with the description of some of the figures. I have one more book of the series on my kindle, but first, there are a few others I want to read.