At some stage during the past two years, I read about "The Thursday Murder Club" by Richard Osman - was it on someone's (Monica's?) blog? Anyway, a fellow volunteer and almost neighbour recently lent me her copy, and I am glad she did! 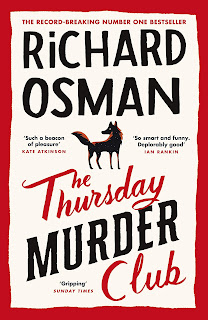 The Thursday Murder Club are mainly four friends living in a retirement village for the rather affluent. They regularly go over old case files and try to solve them more for the intellectual stimulation and satisfaction than anything else. But then, a property developer is killed right under their noses (literally), and of course they set off to solve the case.

Needless to say, they do indeed solve it (and some other, more or less related cases along the way), and faster than the police, too. Speaking of the police, mainly present in the shape of a young police woman who desperately wants to escape the tedious beat work, and her middle-aged boss who is struggling with his weight as much as with his loneliness.

I enjoyed each and every line of this. There is a lot of wit and humour in the book, but also plenty to make you think about family, friendship, love, death, loyalty and getting older (a topic very close to home for me these days).

The book has its own entry on wikipedia, which also links to the entry about the author. Wikipedia says that Steven Spielberg has bought the film rights. Throughout the book, my inner cinema was at work. I wonder whether other readers have the same idea about who should play Elizabeth? For me, Helen Mirren is the obvious choice.

Yesterday, my volunteer colleague lent me her copy of the sequel. It is next on my to-be-read pile.