The daftest thing happened - and I do fully well understand now how John and Graham get so fed up with blogger sometimes. A bit more than a week ago, for the first time ever since I started blogging, I wrote something that I did not have the time for finishing there and then, and therefore left it as a draft.
I travelled to England for a week, where, contrary to what we had expected, I did have internet access through my sister's ipad. Although I did not spend much time online (we only had a week, and there were so many people to see, meals to eat and places to visit), once or twice I had a quick look at my blog. To all I know, my draft was still intact then.
Now, my first day back at work over, I wanted to give the finishing touches to said draft... only to find it empty. Completely empty! The proverbial white sheet. Blank. Rien. Niente. Nada. Null. Nix!

The only reminder of what I actually wanted to write here is the headline, and so I am going to write from scratch what I remember now, almost two weeks later, of the 10th book I have read this year: 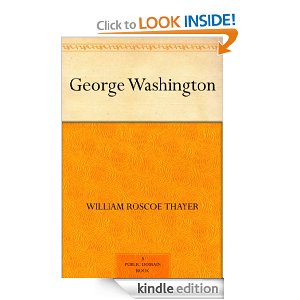 A book I downloaded to my Kindle, because a) it was for free, b) I like biographies and c) I didn't know anything about George Washington except for that he was the first President of the United States of America.

William Roscoe Thayer wrote this biography in 1922, and the reason for him to do that is stated in the preface, in his own words:

"I was interested to discover, if I could, the human residue which I felt sure must persist in Washington after all was said. Owing to the pernicious drivel of the Reverend Weems no other great man in history has had to live down such a mass of absurdities and deliberate false inventions."

The author also feels he should

"...warn the reader that this book aims only at giving a sketch of George Washington's life and acts."

Well, he succeeded in this, and I did enjoy reading it, also because of the style and language used. There were many words I had to look up, not being at all familiar with military terms (furlough? That certainly wasn't part of the curriculum when I learnt English at school several decades ago!), and Mr. Thayer must have done a lot of research; there are footnotes on almost every page, and an extensive source register makes up the last 10 % of the book.

What he did not manage to do, at least not for me, is to convey a clearer picture of George Washington as a person. Yes, his character, his habits (apparently, he was very fastidious with his clothes), his looks and his way of dealing with problems are thoroughly described, as are the military campaigns and political events he was part of. But if I had to sum up in one word what I feel is lacking here, that word would have to be "atmosphere". 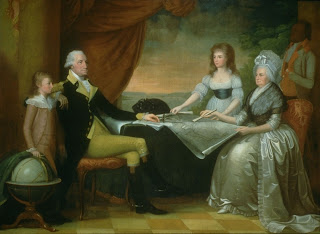 (The Washington family, picture nicked from Wikipedia; it shows George and Martha Washington with the two children she - a widow when the two of them met - had from her first husband, as well as one of the many slaves the Washingtons owned, in spite of George being convinced it was economically - not ethically! - wrong to let slaves work on one's land.)

You know when you can really delve into a book, into a story, the characters becoming real for you, the places being conjured up in front of your inner eye, complete with sounds and scents? That did not happen for me here, and I certainly do not blame the author; he probably never intended to create something so personal and atmospheric - after all, he said it himself, the book was supposed to be a sketch.