This is going to be the next-to-last of my Lake Garda posts; you can find out more about my week there at the beginning of June either by simply going back a few posts or by clicking on the label "Travelling".
Also, as before, there are more pictures of Sirmione on my photobucket album. Click here if you want to see them all.

After our "nice little walk" in the rain forest, the next morning both RJ and I agreed that we wanted to do a bit less walking and a bit more driving today, and so we took the car and went down to the opposite end of the lake, to Sirmione.

The town is small at less than 9.000 inhabitants, but it is a major tourist attraction, situated on a peninusula extending several kilometres into the lake and making it an ideal location for a castle. And that is what Sirmione is most famous for: the castle. 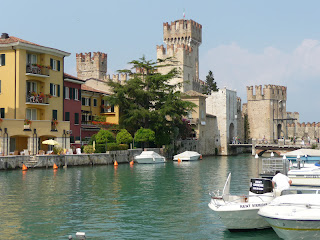 Already the site of a castle during Roman times, in 1259 building of the Castello Scaligero began, and it is pretty much still what can be seen today. 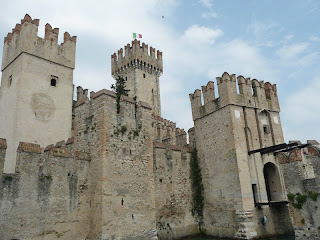 The only way into the town leads through what used to be a draw bridge but has, for the sake of convenience and safety, been turned into a stone bridge. 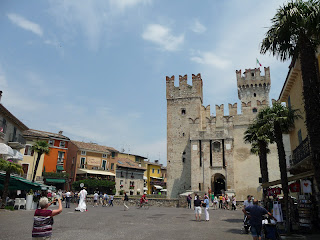 Once you're through the narrow passage, you find a rather charming and picturesque old town, with the piazza in front of the castle as its centre.
As was our habit already in Verona and the other places we visited during this holiday, we avoided the throngs of tourists where we could, and chose a less crowded path that lead past the castle and down to the lake front, where we had a very nice walk along the water. It was quite clean there (I saw only one plastic bottle in the water...) with not too many people; some families on the pebbled beach and a few people walking along like we did. 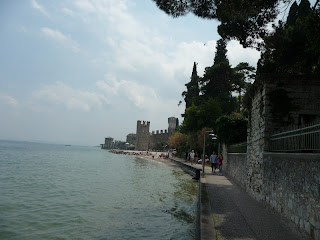 To get back into the town to find a place to eat, we came past some very elegant mansions and posh hotels. One of those big houses was once chosen by Maria Callas as her holiday home, a plaque on the wall told us.
Similar to what happened in Verona, we found ourselves hungry at a time when most restaurants were not serving meals, but there was a small place on a narrow path off the piazza where they did not stop serving for several hours between lunch and dinner time. 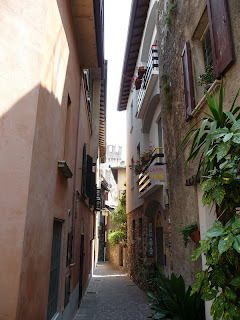 We had an enjoyable meal there in the shade, but an elderly German couple who came in a bit after us obvioiusly did not. Already when they sat down at the table opposite ours, we thought they both looked grumpy. The rather large lady was hung with jewels, and her very red-painted lips were pressed together into a sharp line. Her husband didn't look to be in a much better mood. Together, they ordered one pizza, and a drink each. They ate it - and then, when the waitress came to take the empty plate, they told her that they had found it to be the worst pizza they'd ever come across, as inedible as a shoe sole, and asked her to bring the bill. The poor girl did as she was told, and in front of her eyes, the lady crumpled up the bill and tore it into little pieces, while her husband had gone to the toilet. When he came back, they left without paying, but not before he had loudly grumbled to his wife that there had been no toilet paper.


Both RJ and I were "impressed" - why did they eat the entire pizza if it was so horrible, and not complain to the waitress after the first few bites and asked her to bring something else? Why didn't the man tell the staff that there was no paper in the toilet and asked them to replace it?
Sure, neither of them spoke Italian, but in such a touristy place, almost everyone knows enough German or English for subjects like these. We were convinced that these two simply had been having a very bad day - and it is just not on to take it out on people who have not done anything wrong, but on the contrary are doing their best to give you a nice time at their restaurant, café, shop or whereever.


We tried to sort of make up for the bad behaviour of that couple by being as nice as we usually are, and told the waitress that we had indeed enjoyed our meal, and gave her a relatively generous tip.


After that, we left the old town centre and walked in the sun along the harbour back to our car, which was quite a distance because all cars have to park far from the town.
To drive back to Riva, we chose a different route than on the way there; instead of the motorway, we used the smaller road along the lake, which was very beautiful and picturesque, and led through places such as Bardolino, where the wine by the same name comes from.


We stopped for a while at a small place called San Vigilio. But that, I think, is going to be another post - this one is already longer than I thought it would be!
Posted by Librarian at 08:41