More than 9 years ago, I wrote a post by the title "On Top Of The World". It was about climbing one of the church spires of my home town and the views I had from there. Ever since, I have been wanting to repeat the experience, but the spire is not always open to the public, and somehow it never worked out on the few occasions when a visit would have been possible.

Sunday, the 12th of September, was "Monument Day" in Germany - at least I believe it was for all of Germany, or maybe just for the federal state of Baden-Württemberg, where I live. Anyway, I checked online what historical buildings and other places of interest, generally not open to the public, would be accessible that day. O.K. was spending the weekend here with me, and so I worked out an itinerary for us.

Our first stop was the former garrison church of Ludwigsburg, originally built for the military men stationed in the many barracks in town (we are talking pre-World War times here). After WWII, the church was renamed Friedenskirche, Peace Church. Isn't that a wonderful name? Much better than a church where arms and soldiers, intent on killing others, are blessed! It is not a very old church, but has seen some renovation work. I have never been inside for a service, only on other occasions, and I had never climbed the spire before.

On that day, we had the opportunity to join a guided tour of the beautiful church organ, then another one of the building itself, and last but not least were allowed to the top of the tower. 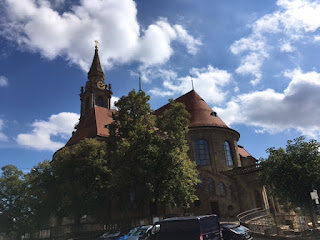 The views from there across my town in all directions were beautiful, and it was the perfect day for it, too: 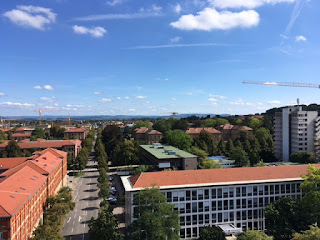 The red arrow shows where I used to work until August 2019. The view from my office there on the 9th floor has featured on my blog several times, too: 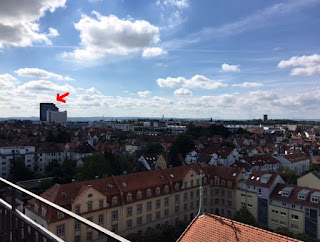 The red arrow here marks more or less the area where I live. It was impossible to really spot my house from up there, but you get the general idea. 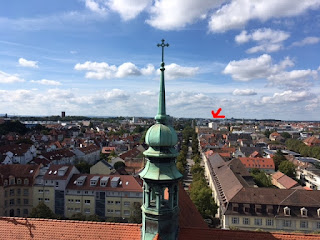 The larger buildings in the middle of this picture are all schools: 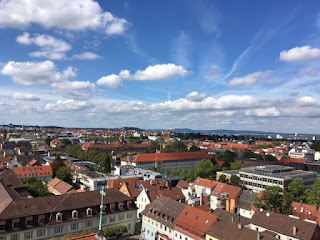 If you look carefully, at the end of the red arrow here you can just about make out two church spires. They belong to the church where we went next, the same one that featured in the 2012-post linked to at the start of this post: 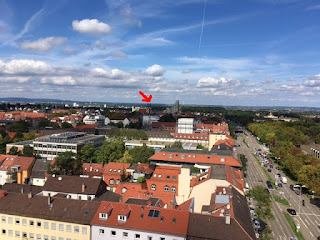 In the picture below, the red arrow points towards the "rocket" I introduced to you first in this post from 2015: 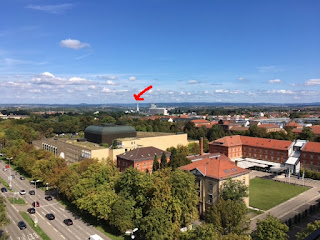 Once we were back on ground level, we walked to the market square - another part of Ludwigsburg you have seen many times on my blog. The church with the two spires was our next stop: 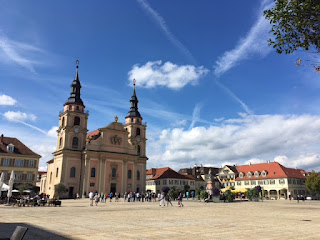 This time, there was no guided tour of the organ or the building; we climbed up almost straight away.

In the picture below, the red arrow points to the bell tower of the contemporary church a bit further up the road from where I live; the sound of its bells punctuate my days when I am home: 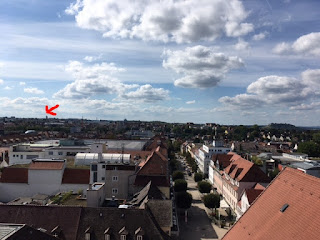 View of the small all-around balcony of the other spire, identical to the one we were standing on: 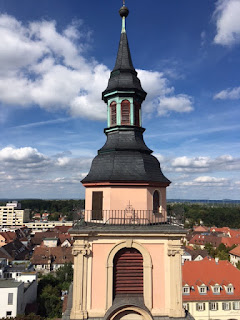 Across the market square; the bright buildings behind are the palace, which should be rather familiar to many of you through my blog: 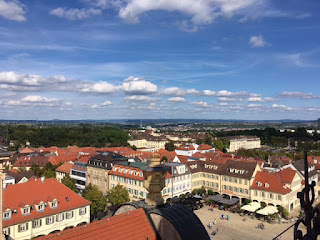 Here is the "rocket" near Marbach again: 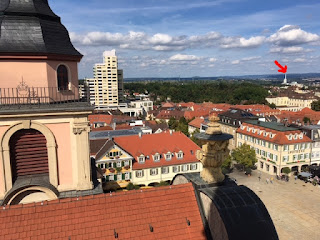 Market Square with the Catholic Church on the opposite side; its spire was not accessible that day: 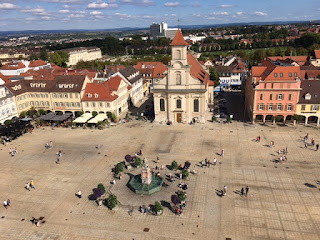 "My" Irish pub is where the red arrow points to: 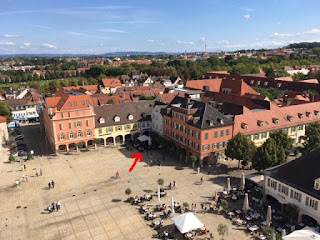 And last but not least, you can see the spire of Peace Church in this picture: 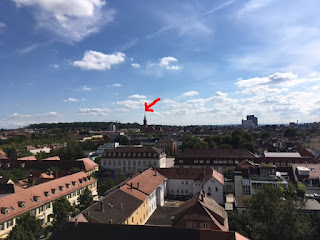 Climbing towers and taking photos was by no means all we did that day. To finish, we had booked a guided tour at the City Museum late afternoon. The guide was one of the architects involved in converting a former historical civil service building into the museum it is today; he showed us what was left of the original walls and what modifications were made (and why) - all under the restrictions of a listed building. Definitely not an easy task, but I think the result was well worth the effort (and the cost).

I went home that evening with a renewed feeling of affection for my home town, which has seen so many changes in the brief 350+ years of its existence.