As mentioned a few times already in this series of holiday posts, Austria is just on the other side of the range of mountains, or round the bend of the road leading out of Oberjoch.

On Saturday, Sept. 25, we took the car and drove about 15 minutes into the Tannheimer Tal (Tannheim Valley). There are no border controls between Germany and Austria (at least not at the moment, and not at that place), and so you notice the difference only when you pay attention at road signs.

Our idea for the day was to walk around the Vilsalpsee (Lake Vilsalp, Vils being the name of the stream coming out of that lake) and to the waterfall at the end of the valley.

As expected, we were not the only ones to have that idea; it was a beautiful day (the warmest of our holiday) and a Saturday. On such days, parking is not allowed anywhere near the lake unless you work at the café there or have other legitimate reasons. There was a large parking lot on the outskirt of the nearest village, and because of the many cars still coming in, in addition a large field had been opened and several villagers were directing the drivers. A bus service was operating between the village and the lake, but we decided to walk it.

It was a pleasant and easy walk to the lake, and with less people on the path than what we had expected from the number of cars.

The lake is beautiful, and O.K. took many pictures; here is just the one I took: 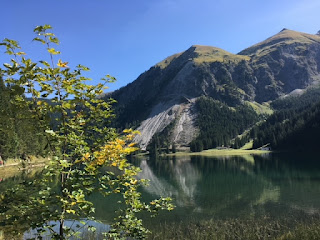 Onwards we went through the woods towards the waterfall. The path leading right up to the fall was slippery in parts, and rocky; I did not go up as far as O.K. did, because I was not keen on having to navigate my way back down again. 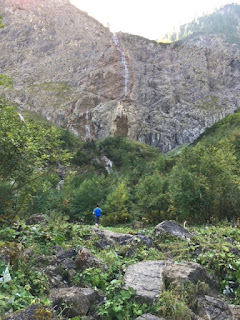 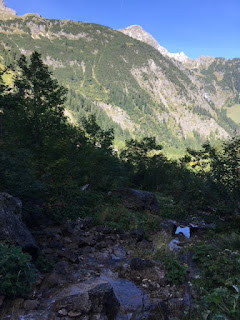 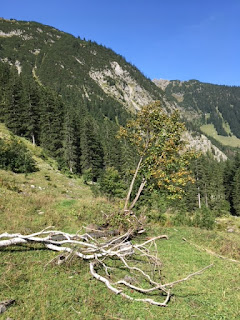 After our visit to the waterfall, we walked back to the lake and to the village, this time chosing the path on the other side of the lake so that we completed a full circuit around it.

It was early afternoon by the time we returned to our hotel, and since we did not feel like another walk after the 16.5 km we already had under our belts that day, we remained at the hotel and had a snack and a shandy on the terrace. 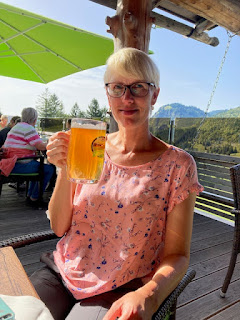 When I was packing for this holiday, I had put short-sleeved tops in my suitcase, hoping that I was going to need them - and I did!