Only now, when writing this post, did I realise that I had the date wrong for the previous post - the day of our arrival was not the 21st, but the 20th of September. It has now been amended.

By the way, as I said in my reply to Bonnie's comment to yesterday's post, O.K. had been at the same place (same hotel, too) six years or so ago, the year before we met. When we were planning our September holiday, our original idea was to go to Austria, but there was no way of knowing what the Covid regulations would be by the time we returned home; it could have happened so that we'd be quarantined in spite of being fully vaccinated. We did not want to risk such hassle and therefore went to Bavaria. Not actually very far from last year's September holiday, but still a different place with different hiking routes for us to explore.

And as you will see in a later post, we still made it to Austria for a hike - the border is just a few miles outside Oberjoch.

Right, let's get started on our first full day, Tuesday, the 21st of September. The first three pictures show the views from our hotel room greeting us that morning: 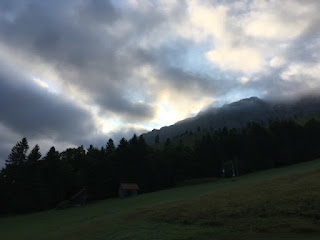 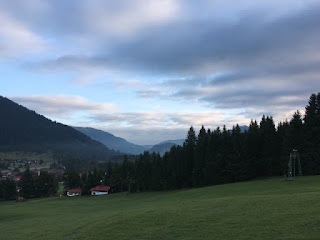 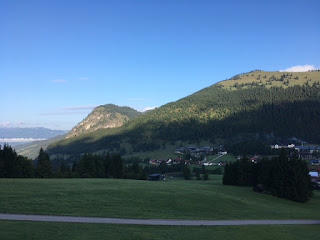 Our first hike of this holiday took us across the valley and up on the other side. You know I am not good at steep, long uphill bits, and so I panted and puffed my way up. But I made it, and we were rewarded with beautiful views. 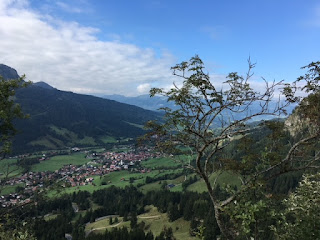 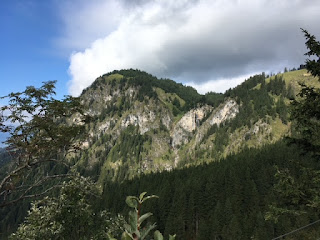 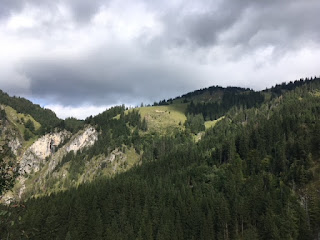 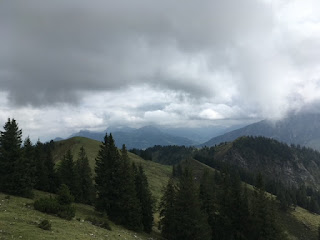 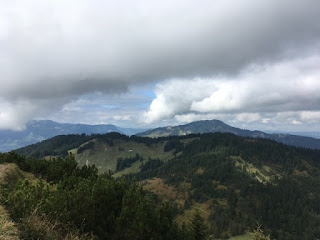 You can just about spot O.K. in this picture. Can't see the path? Well, neither could we really at that particularly steep and rough part of the hike. But it was there, and we reached the peak eventually, being glad we were going up here, and not down, which would have been much harder with the constant danger of slipping. 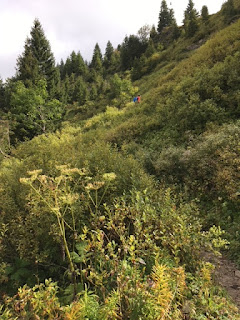 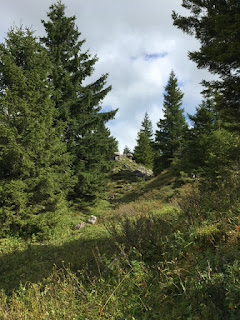 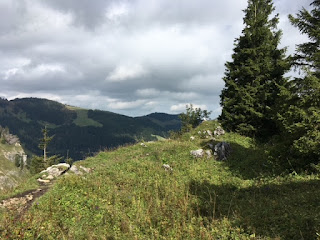 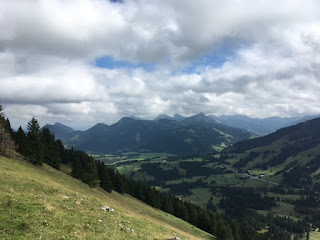 We could see all the way across the valley and the village of Oberjoch. Our hotel is a bit out of and above the village; see the yellow arrow. 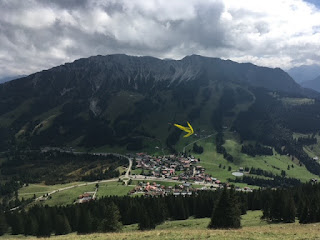 See the tin box near the base of the cross? It contains the Gipfelbuch ("peak book") and a stamp. Ambitious hikers can collect stamps for their own "peak pass" to prove they have been there, and leave an entry in the notebook that is always kept at the cross. You can find similar boxes at almost every peak in this region; I don't know how typical they are for other countries or regions. We do not have peak passes and did not leave an entry in the book; our own memory and photos (and this blog) are enough proof that we've been there. 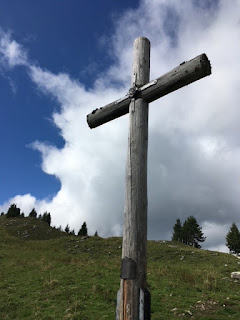 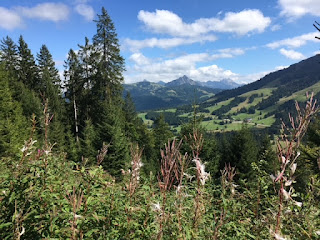 The entire hike had been only about 11 km long, but that was enough with the rough and steep paths. By the time we were back at the hotel, it was only mid-afternoon; plenty of time to visit the spa and then have a shandy on the sunlit hotel balcony.