This is the 2nd book of the small pile Mary gave me when my sister and I went to see the family in England back in May, as mentioned here (plus, if you are interested, there are several blog entries from our week there under the label "Travelling"). 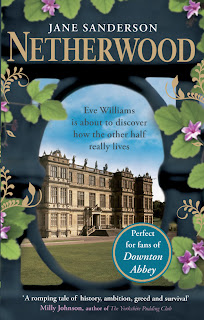 "Netherwood" by Jane Sanderson was a good read throughout, although in some cases, I was left with the feeling that I would have liked for the author to explore more of certain character's lives; but, as I gather from the (very nicely done) author's website, there is to be a sequel out in September, so my curiosity may be satisfied then.

The story itself sounds simple enough: Young woman from the humblest of backgrounds meets tragic events that could turn her life this way or that - she decides to fight, and with the help of loyal friends and powerful allies, works her way up to become a successful business woman, finding true love (who would have guessed!) along the way.

What gives "Netherwood" its special appeal to me is that it is set in South Yorkshire, in a small mining town near Barnsley, an area I know well, because it is were my late husband's family come from (in fact, Steve proposed to me in a pub in Barnsley).
I can hear the character's voices, picture the small houses and smell the cooking.
Yes, there is plenty of cooking and baking going on in the book - and some of the recipes are at the end of the book as well as on the website.

Most of the time, I can relate to what the characters do and how they feel; places and people are described in a manner that makes it easy to visualize them, and the flow and pace of the story is neither too complicated nor too fast, but makes for a relaxing read.

I learnt many new and was reminded of old words by the book. Some examples are batch of parkin, knur and spell, laikin, bramleys, filly, britches, pleached hornbeam, attar of roses, and obeisance. Someone's thirst is slaked (never heard that expression before), and Gibson Girls are mentioned. The countess "peals with laughter" at a party, and that made me realise I have no idea how anyone's laughter can be compared to the sound of pealing. Can you? A young man "unfolds himself from the stone balustrade on which he was artfully draped", and can't you just picture that? (Needless to say, that particular young man is quite full of himself and doesn't care much about anyone else but His Lordship.)
Sometimes the way speech is written as dialect can get a bit in the way of reading. Not because I wouldn't understand it (I do), but because of all the 's for dropped letters. An example:

And that is pretty much how every sentence uttered by the humble Yorkshire miners and their families looks like, and how Eve Williams, the heroine, talks.
So, a bit less of the ', and the book would have been even more pleasurable to read. Yes, I do understand the author used this way of dialect writing to add to the atmosphere, but it wasn't always necessary, I think.
Very good editing; I didn't find any typos or inconsistencies.

And I am probably going to try to make drop scones - they sound easy enough, even for someone like me :-)
Let me finish with a picture of Yorkshire puddings straight from the oven: 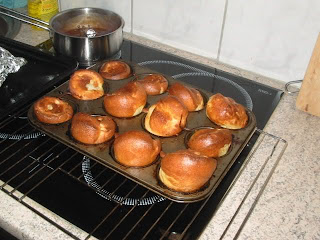 Steve made these often for us on Sundays, and I know how to make them, too. Next time, I'll make sure to take new pictures and post the recipe Steve got from Mary.
Posted by Librarian at 08:25