Some of you know that my sister and I have been friends with George Pickles, former Hornblower of Ripon, and his lovely wife Lilian, for some years now.
Maybe you even recall that I have posted an interview with George a few years back to mark New Year's Eve; that interview is here. Or the intriguing story George allowed me to share as a guest post to mark Christmas one year; that story is here.

In 2017, I learned that Ripon had introduced its first female Hornblower to keep up the tradition of setting the watch that has been going on for more than 1,000 years.
Of course George knew more about it and, as befits his generous and kind nature, he introduced us to Allison this year. We met on Ripon's market square in time to attend the setting of the watch by her. Allison then told us and the other visitors a bit about the history of the tradition, and when the others left, George introduced us. A pleasant chat followed before it was time to get out of the chilly night air and back to our warm cottage.

My sister took this photo of George, Allison and myself. (I have both George's and Allison's permission to publish it here.) 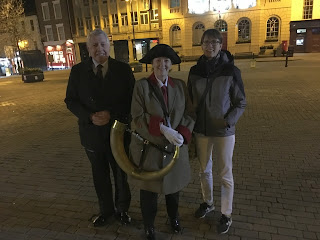 Since then, Allison and I have exchanged emails, and she has agreed to answer a few questions. Here is our interview:

1. How did it happen that you became the first female Hornblower in the over 1,000 years of this tradition? (I know you told me briefly, but I want to make sure I get it right!)
The Hornblower job was advertised in our local paper The Ripon Gazette (apparently it is the first time the role has ever been advertised). I applied and was interviewed. I don’t know how many people applied and were interviewed but the interview panel decided to appoint two of us, me and Richard M. This meant that we now have a team of four hornblowers.

2. Were there any changes the City had to make for you because you are a woman, for instance to ensure your safety?
No changes were made. I have never felt unsafe on the square. There are usually a lot of people around. My husband often comes with me for company and George gave me the number of the police who control the surveillance cameras on the square so if I did feel uneasy I would ring them in advance and ask them to monitor me.

3. Sometimes women in predominantly male areas of life feel they have to work extra hard to be taken seriously. Do you ever feel this is the case in your position as first female Hornblower?
I have not felt this at all in this role. Everyone has been very welcoming and encouraging. A lot of people who have watched the ceremony have congratulated me on being the first woman to be appointed to the role and have seemed genuinely pleased.

5. Has this position influenced other aspects of your life, and if yes, how?
Being a Hornblower has made me more interested in local history and I have joined The Civic Society as one way to learn more. I have also read more books and articles about Ripon. It has also made me appreciate living in Ripon even more and I feel very proud of the City and its history and traditions.

6. Ever thought about retiring from it?
No - I feel I have only just begun and am happy to continue whilst I am enjoying it.
- - -
Allison, thank you so much for your time! It was lovely meeting you in March, and I hope we'll meet again during my next Yorkshire Holiday!

- - -
Addendum:
My blogging friend Monica from Sweden has posted about her visit to Ripon in 1974 and seeing the hornblower - please have a look here.

Thanks to George, I can tell you that the name of Monica's Hornblower was either Phillip Harrison or Brian Waines. How do I know this?
Check this photo of the plaque on the obelisk on Ripon's market square as it used to look like until someone decided to take it down (and not update and restore it, as was the original idea after George retired a few years ago): 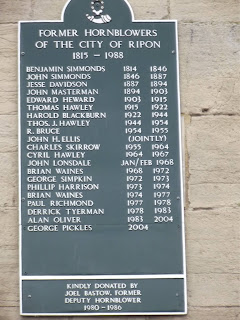 Isn't it fantastic how one thing can lead to another in the blogging world? When Monica saw the Hornblower in 1974, little did she know that 45 years later she was going to post about it, inspired by someone else's post about a more recent meeting with another Hornblower!
Posted by Librarian at 17:17