Getting There By Winding Roads

By "there" I mean my Dad's funeral, and the two and a half weeks leading up to that day were so long and varied, so busy and involved while at the same time feeling strangely detached that they felt like a trip on winding roads.

Monday, the 24th October - arriving at that date means exactly two months left until Christmas Eve, my favourite holiday. This year, it will be difficult, as I have never known it without my Dad.

Weatherwise, the day was windy but mild, bringing some rain on the wings of a thunderstorm. After work, I went to my Mum's to help her with a few things and was rewarded with a large and delicious piece of Zwiebelkuchen (literally "onion cake", but it isn't a sweet cake, more something like a mix between pizza and quiche).

Tuesday (Oct. 25) was sunny and warm again. I worked until 3:00 pm and then made my way to Stuttgart for the annual members' conference of my work association (Data Protection Officers). Although the association has nearly 2,000 members, only about 50 were present at the meeting. Our relatively small group was invited to an "after show" party at the offices of our supervisory authority, spread over two floors of a nondescript office block in the city centre. There was live music by a tiny combo with a saxophone and a cello, wine and beer (and soft drinks) plus a large assortment of snacks. We were free to roam the halls (not the single offices, of course) and admire the artwork installed. I remember the time I arrived home: 21:21.

The next two days (Wednesday and Thursday, Oct. 26 and 27), the actual conference took place, this time with much better attendance than the members' meeting. We were pampered and had plenty of coffee, tea, fruit juices and snacks in between sessions, and on the Wednesday evening, a formal dinner with speeches and so on. It was all very strange to me, as if I had entered a parallel universe where my Dad's recent death and all the things we still needed doing were unknown, but ever present in my mind.

O.K. arrived at my place on the Thursday evening.

My Dad's funeral was on Friday, the 28th of October. The day started cloudy but later the sun came out, lighting up the beautiful flowers around the blue bird marking my Dad's grave. Friends and family, neighbours and former colleagues of my parents arrived; some of them had not seen my parents in years, and although it was good to see them, I couldn't help thinking how much my Dad would have enjoyed their visit while he was still at home. Why is it that people can come to someone's funeral but not visit them while they are still alive? 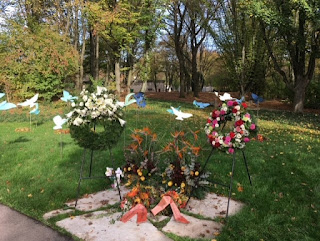 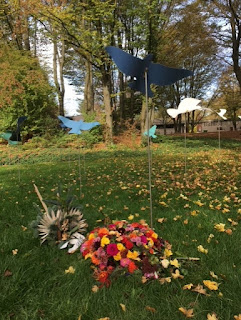 The music my Mum had chosen for the service was moving, and the priest spoke well. We had deliberately opted against singing. We then proceeded to a nearby farm café where we had reserved space for about 30 of us. Spending time with those friends and family members who joined us there was good. Afterwards, my Mum hosted a meal for eight of us.

With all the sadness the funeral obviously meant, it was a good day and an important step in the grieving process.

One of my cousins who lives in Paris had to travel back only the next evening, and so O.K. and I spent most of Saturday (Oct. 29) with him. During our childhood, my sister and I were pretty close to our cousins, but with everyone growing up, moving away and following different paths in life, we rarely saw each other over the years. Still, when you have known someone as a child, that connection is still there, and it was a very nice day.

Sunday, the 30th of October, was the warmest day of that week: 25C! O.K. and I had a leisurely breakfast and then went walking until mid-afternoon, stopping for a shandy at Asperg's Nature Friends. 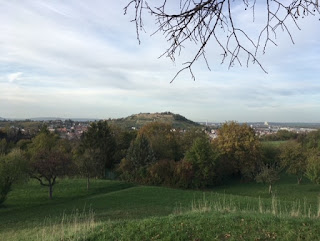 After coffee and a bit of a rest at home, we were off again, meeting my Mum, sister and two close family friends who had come to the funeral all the way from Berlin, at a restaurant for dinner.

As you can see, I did not take many photos that week, and during the week had little chance for walks apart from the short distance from my house to the train station and back. But being in a work-focused environment for two and a half days was good and helpful, as was the funeral and all that it entailed.