The last full week of November and the 1st Advent Sunday is behind us; December starts the day after tomorrow. This year, it all feels different and yet so much is the same as "always". It makes for quite a mix of emotions, I can tell you.

Almost every day that week, we had a mix of sun and clouds with a few sprinkles of rain in between. It was colder than the month had been so far, but still "too warm for the season", according to the weather folks on TV.

Monday, the 21st of November: Only one month to go until winter solstice, and the slow but sure increase of daylight! The fortnightly meeting with my volunteer group was cancelled, because there would have been only three of us. This gave me the opportunity for an after-work walk; nothing special, but good for me nonetheless.

Our Christmas Market opened on Tuesday (Nov. 22) - the first one since 2019. I didn't go, because my Mum, my sister and I had planned to write the cards I'd had printed to notify everyone of R's death.

The parcel from the printer's arrived as scheduled, but... the card was done entirely wrong! Instead of the photo we had chosen to be on the front only, it was printed on the front and back, so that you could only see half of it when you looked at the card. Instead of the card opening to the side (like a book), it opened from bottom to top (like a wall calendar). And instead of the inside showing a poem on the left and the actual notification on the right side, they had squeezed both pieces of copy on one side, upside down when you open the card. That was definitely NOT what I had ordered, but now we needed to react fast.

My sister talked to the people at a local copy and print shop, and they agreed to print our cards over night if they got the data this afternoon. I prepared a USB stick and met my sister at the shop after work; we explained what we wanted (I also showed them the wrong print) and placed our order to be picked up the following day.

We popped in at our Mum's to pick up two parcels she had asked us to post for her, did that and then went home for a quiet evening in. With all the back and forth and the dismay about the card, it was good to see my sister.

For my lunch break on Wednesday, we met up at the shop again. The cards were now exactly how we had wanted them, and I was very relieved. For our actual lunch, we walked over to the Christmas market and had one of our favourite foods, a "Holzofen-Dinnede", as shown here. It was our first "proper" Christmas market food since 2019, and tasted just like it should, piping hot directly from the wooden stove.

After work, the three of us gathered round our Mum's dining table and wrote the cards; my sister posted them that same evening while our Mum heated the vegetable lasagne she had prepared for us (the best ever).

Thursday, the 24th of November - Christmas Eve exactly one month away. It will be so very different this year with just the three of us there.

I worked on-site at my client's office with our customary walk around the block after lunch. For the evening, my boss had invited us to our annual party; he was supposed to cook a festive meal for us at his home, but a spontaneous change of plans meant the three of us (our fourth colleague was excused) met at the Holiday Inn next door instead. It was good to see them and catch up with each other, and our boss drove both me and my colleague to our respective homes afterwards.

A day of mixed activites was Friday, Nov. 25. I spent the morning working from home as usual. In the early afternoon, I attended a guided tour on the abandoned industrial area next to the train station; I have posted about it a few times, for instance here for its official opening (in parts) to the public.

The tour covered 10 stops where we were asked to leave our feedback and ideas for future use; what we would like to be kept and what needed changing in our opinion. Half of the area is now owned by the city of Ludwigsburg, and they really want to develop it for public use, not the enclosed space it was during the decades of production.

I took many pictures but will show them to you in an extra post.

By the time the tour finished, I was freezing - all that standing around, listening to explanations and people voicing their views, mostly in empty unheated buildings. But my flat was warm and cosy, and when my friend arrived shortly after 6:00 pm, I was alright again.

We were to meet our former school mates at the Christmas market later that evening, but we always want a bit of time to ourselves before we meet the group, and even more so this time as she has recently lost her Mum and I my Dad - we used to live next door to each other, and I have known her mother since before I was six years old. After an hour or so, we left for the market. It was packed, and I thought about leaving a few times, but then adjusted, had something to eat (you can guess what, can't you) and to drink. We later walked the short distance to a restaurant where a long table was booked for us; nobody ordered food, but some of us had plenty to drink (not me). At some stage, it was all getting a bit too much for me, nice as it was to see my old school mates, and I was first to leave.

Saturday saw me doing my usual cleaning, washing and ironing; O.K. arrived mid-afternoon. After coffee and cake, we went for a quick walk before dark. I then retreated to the kitchen where I prepared Kässpätzle for the three of us - I had invited my sister for the evening, and Kässpätzle is great for when you have guests and want to get the kitchen warm and cosy. 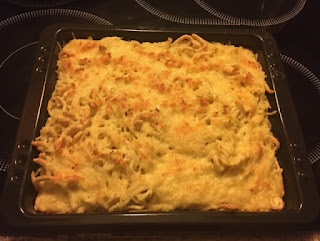 My basic recipe for Spätzle remains unchanged since I posted it here, but I do not add ham anymore and use a different mix of cheese and cream. The Merlot I served with the meal was good, too, but best of all was my sister joining us.

During the night and very early Sunday morning, the temperature dropped to just below frost at -2 Celsius. O.K. and I had our customary leisurely breakfast before going for a walk in the sun. We then went to my Mum's for coffee, and afterwards, I put up a few first bits of Advent decoration and lit the first candle on the Advent wreath bought last week. 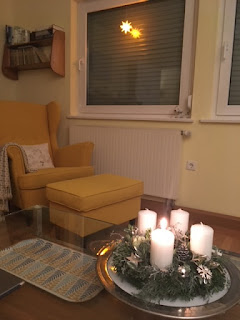 Then it was time to cook so that we could eat at 7:00 and it would not be too late for O.K. to start the long drive home.