Three weeks and one day have passed since my Dad died. We are beginning to adjust to a new normal life now, and for me that also means to resume (more or less) regular blogging.

Catching up since my last "normal" post will take some time, but I need to do this for myself; it is a bit like confirming that life is still going its course in spite of the big disruption and change my family has been experiencing.

I stopped my diary-style posts with Monday, the 3rd of October. This post will cover the rest of that week, which was sunny and mild throughout, with temperatures going up to 22 Celsius.

Tuesday, October 4, was the start of the working week after Monday's public holiday. After the usual trip to the Covid test station and visiting my Dad in hospital, I took a long detour through the deer park for my walk home: After our five days in the Odenwald in September, I had begun to bring my tablet PC to hospital so that my Dad could look at the photos, something he enjoyed, and so I took many of the pictures of that week with him in mind.

Weatherwise, Wednesday Oct. 5 was the warmest and most beautiful day of the week. I had my 3-monthly appointment at my eye doctor's in the morning, and for the time between 4:00 and 6:00 pm, I had to wait at home because our water meter was scheduled to be swapped for that time. Therefore, no hospital visit that day - instead, I made use of the hours before sunset and took one of my favourite after-work walks, across the fields via Freiberg to Benningen and back home by train. 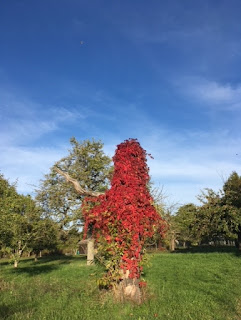 Even the usually not very picturesque railway tracks looked beautiful: 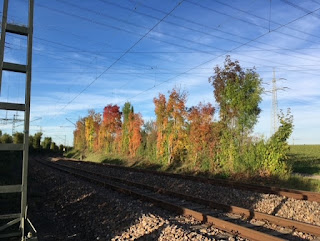 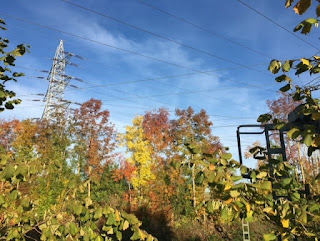 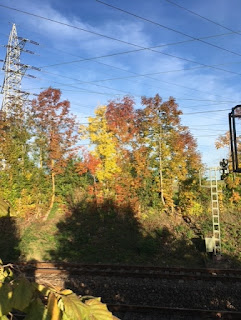 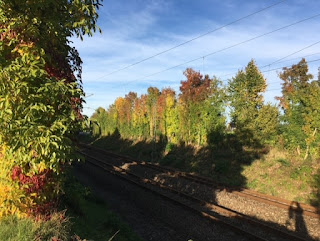 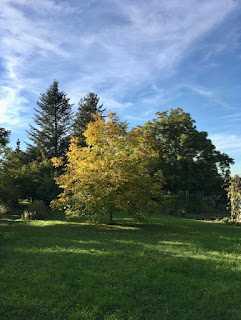 Same goes for the nondescript industrial estate I briefly crossed along the way: 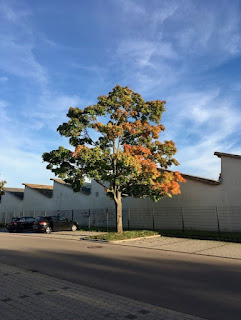 Apples of various colours adorned the trees on the fields: 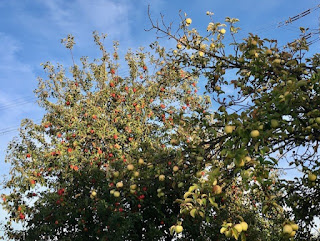 Coming up towards a cluster of farms about half way between Freiberg and Benningen: 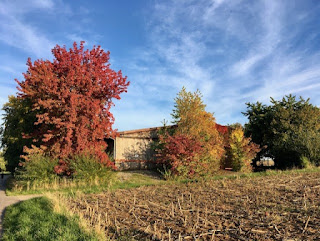 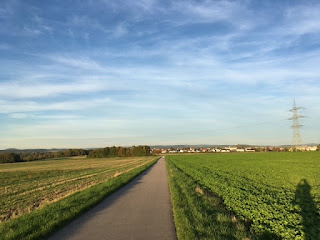 Above, the first view of Benningen after the farms. Below, there is a path through a mini nature reserve (officially, a Landschaftsschutzgebiet, meaning there is no building allowed and no roads through it) which is popular with walkers, with and without dogs. Funnily enough, there was hardly anyone about that evening. 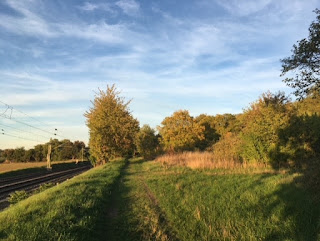 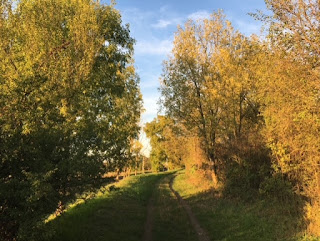 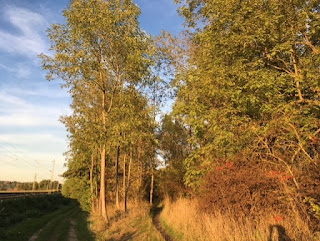 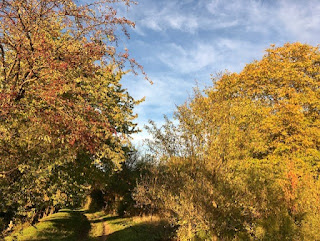 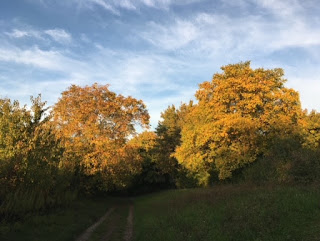 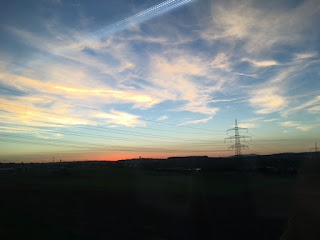 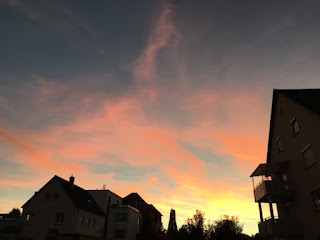 It was just after 7:00 pm when I walked up to my house from the station, facing what was left of the sunset.

Work, testing and the usual hospital visit were in order on Thursday, Oct. 6. Afterwards, I went back with my Mum; we shared a pizza before it was time for me to go home.

Before work that morning, I met up with my friend and her six-year old daughter. The little girl has started school in September, and her mother walks her to school every day until she is ready to go on her own. She goes to the same school I went to, and it was nice to be in front of the building still so familiar after all these years - and of course it was even nicer to meet my friend and little Claire.

On Friday, Oct. 7, work around my house began. Nearly two years ago, the path had been repaved (see here), but it was not done well, and on the south side of the house, the slabs were sacking and the wall of the cellar on that side was showing signs of humidity.

The work now was given to a different firm, and from what I can tell, they have done a much better job.

Once again, I went back with my Mum after hospital to help her with a few things. At home, I prepared a creamy risotto with butternut squash for myself and O.K. - but he never arrived that night. On driving onto the motorway minutes after leaving the village, a lorry pulled over without checking, forcing him to swerve. His car hit the curb, resulting in a bust tyre - thankfully, nothing worse than that! But of course he could not drive on, and had to wait there for the service guys to pick him (and the car) up, and until his car was sorted the next day, he had to go back home. 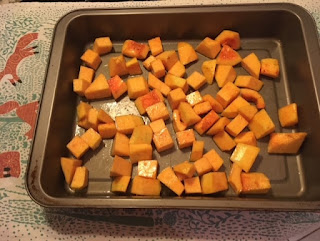 He arrived mid-afternoon on Saturday, Oct. 8 instead, just in time for coffee and cake. Because I was waiting for him, I did not go to hospital for the second time that week.

For lunch that day, I was invited to a remembrance meal with friends of Martin, who died earlier this year. It would have been his birthday, and it was good to spend a couple of hours together, looking at photos and talking about him.

After coffee and cake with O.K., we went for a walk on the fields, stopping on the way back for a shandy at the Feuerwehrfest in Pflugfelden. 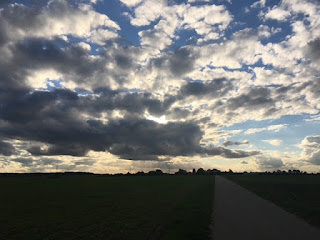 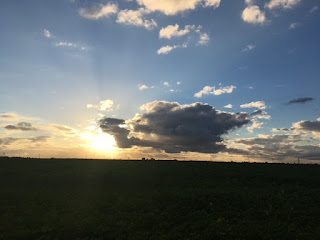 For the last part of our way home, we tried to take pictures of the beautiful sunset, moon rise and the first stars appearing. Believe me - it was a lot more beautiful in real life! 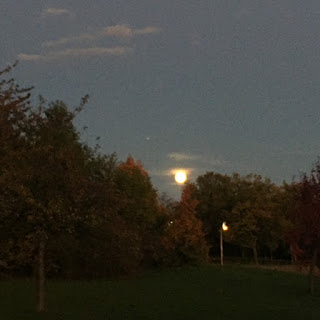 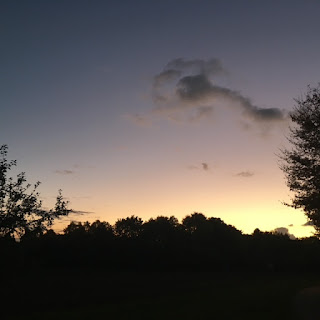 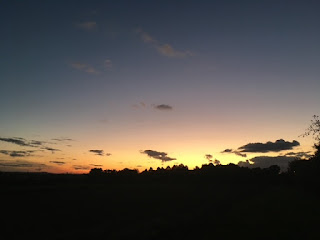 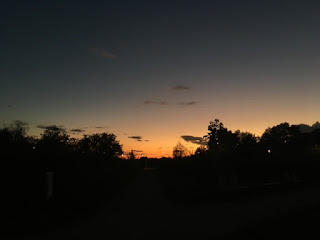 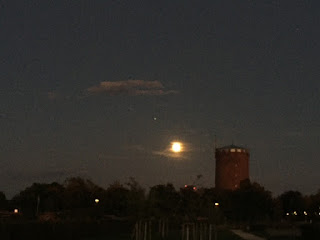 We ended the evening eating the risotto I had made the day before, accompanied by the rest of the white wine I had used for it. It turned out nice, even if I say so myself. 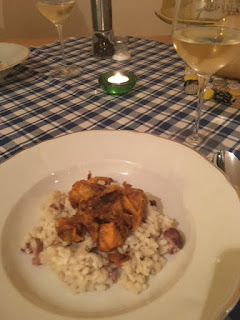 No photos for Sunday, the 9th of October. In the morning, O.K. and I went for a combination of running and walking. After breakfast, I took my usual Covid test and then walked to hospital. I met up with O.K. in the palace grounds afterwards and we enjoyed a walk there before it was time for our evening meal, and O.K.'s drive home.