After the very hot weekend of June 18/19, it was a little cooler on Monday, June 20. I took an hour or so out of work to run an errand for my parents, and went for one of my favourite after-work walks later. It was really pleasant out there on the fields, but I couldn't help thinking how far along everything seemed to be - and this was only the last third of June, with the first half of the year not over yet. Look at the pictures I took that day and see what I mean: 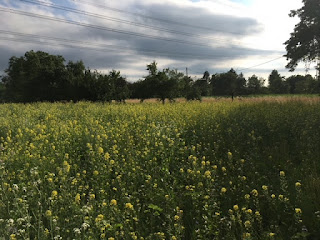 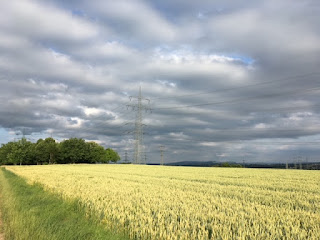 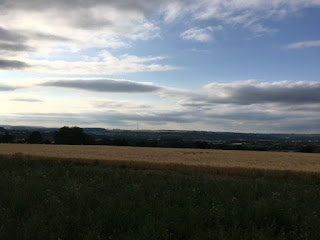 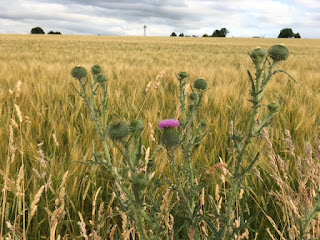 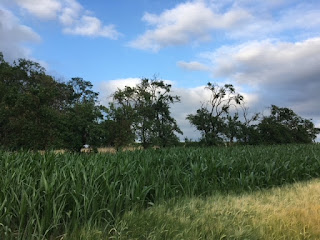 I have written a separate post for Tuesday, June 21, so we can skip that day here.

Wednesday, June 22, finally saw a bit of rain. It was still fine enough in the morning, which allowed me to go for a pre-work walk with my friend once her children were in kindergarden.

My upstairs neighbour joined me for a cup of coffee in the afternoon on Thursday. The family are from Turkey and will go there for their summer holiday the same day that my sister and I return from Yorkshire; their eldest daughter (who lives there) is getting married, and I let my neighbour write the groom's name down for me on a sticky note so that I shall spell it right on the card I intend to give them before I leave for England.

It was also the day for the regular fortnightly meeting with my volunteer work; there were only four of us this time, and admittedly we did talk shop only for a bit before we simply enjoyed a fun evening with good music and cold drinks at the recently opened industrial area at the train station (as shown in this post).

Friday, June 24, was a busy day with an online meeting of my professional association, lasting until early afternoon and with me giving two presentations as well as moderating part of the meeting. Afterwards I did my usual round of weekly cleaning, packed my little red suitcase and walked to the train station. For a change, both my trains to O.K.'s were on time, and at about 9:30 pm, we sat down at the cottage for a delicious meal of assorted cheese and rosé wine.

It was good to get away from the noise and dust I had been subjected to all week; the house next to mine is getting a complete make-over. This is what it looked like that morning: 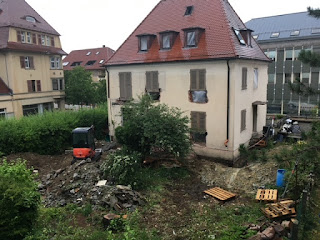 Saturday, June 25, was going to be warmer again at almost 30C. We managed to get up early enough to enjoy a leisurely paced "run" of about 7.5 km in the morning; there was still enough puffing and panting on my part, but O.K. helped me to pace myself well so that I even managed some of the uphill bits that usually see me walking instead of jogging.

After a late breakfast on the balcony, O.K. took care of some things around the cottage while I spent several hours reading and dozing, still on the balcony (and before you ask: No, there wasn't really anything I could help with). He joined me there for coffee and cake in the afternoon, and some time later, we welcomed the evening with very refreshing glasses of Apérol Spritz, going for a short walk around the village afterwards to catch the beautiful evening light before returning to the cottage for a light evening meal. 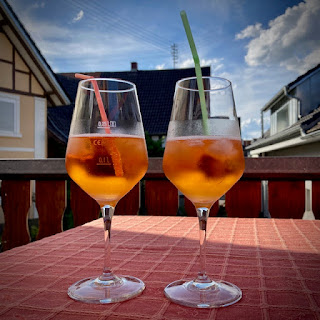 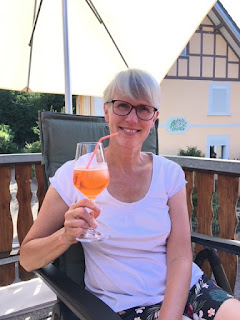 We set the alarm on Sunday, June 26, so that O.K. had enough time to get ready - the village band were booked to play at the next village to help celebrate the 100th anniversary of the fire brigade.

Only last year (or was it 2020?), they finished a brand new building on the fields between the two villages; it houses all modern technology and state of the art machinery. The brigade serves the three villages making up the administrational unit of Hohberg, and has been doing so for 100 years - certainly an occasion worth celebrating! 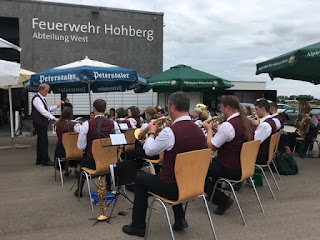 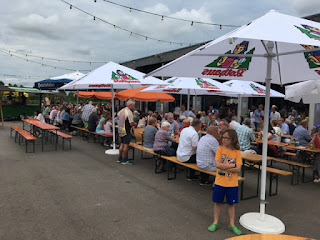 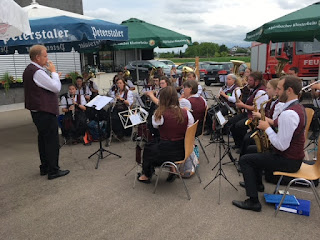 It was interesting to tour the building, and once the band had finished, O.K. and I enjoyed a shandy or two before cycling back to the cottage. After what looked like a cooler and wetter morning, the day had become rather hot by then, and we rested for a few hours before making use of the beautiful evening light by going for our first proper bike ride of this year.

We cycled along the rim of the woods, crossed the Kinzig and went back on the other side of the river, briefly stopping at this place (called Großer Deich, "big dike") to take in the view of Ortenberg Castle in the evening sun. 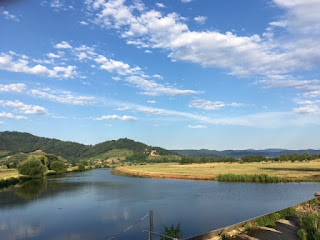 There was still enough daylight left for us to have our evening meal on the balcony, and we remained there for a while afterwards, watching the upcoming thunderstorm; the lightning in the distance was quite spectacular. Eventually, we retreated inside; it was going to be an early start on Monday morning (5:20) and time for bed.